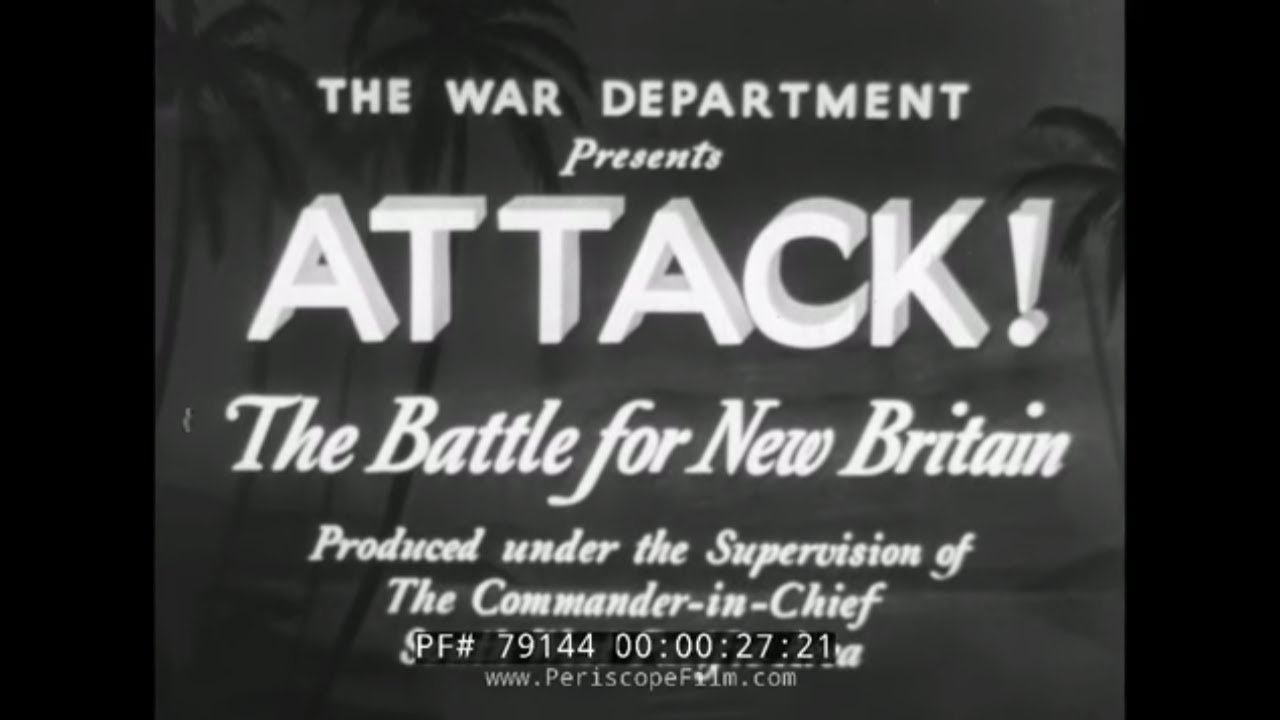 Attack! The Battle of New Britain is a documentary/propaganda film produced by the U.S. War Department in 1944, depicting events in 1943.. It details, as its name implies, the New Britain campaign, which was part of the New Guinea and Solomon Islands Campaigns during World War II.

The film follows a rather standard format: it is a chronological narrative of the campaign from the arrival of the soldiers in New Guinea to their capture of most of the island. Opening with travelers book pictures of the area, reminding the audience what the average soldier image of what the South Seas would be like, and it then details the natural hazards of fighting, or even being in the jungle, including the insects, diseases and heat. The marines and soldiers set up a little tent city, with the significant help of the local natives or “fuzzy wuzzies”. After the base has been established and enough men are ready, General Douglas MacArthur arrives in person to discuss the upcoming campaign with the unit’s CO.

With the aid of maps and non-combat footage, the audience learns about the plans for the attack, the geography of the island, and the variety of armored vehicles that will be used in the upcoming battle, including the “alligator” and “buffalo” amphibious assault vehicles. D–day is on Christmas, and while the sailors and marines assemble in the rear, the airmen spend Christmas Eve strafing the island, to make way for their comrades’ assault. The campaign is then followed through chronologically, focusing, at the end, on the many wounded and killed who have sacrificed so much.

The New Britain Campaign was a World War II campaign by the Allies, between December 1943 and the end of the war in August 1945, to contain Japanese forces concentrated in Rabaul, the capital of New Britain, the major Japanese base for the New Guinea and Solomons campaigns.

United States, Australian and New Guinean forces, assisted by local civilians, were always a division-level command or smaller: the U.S. “Director” Task Force (effectively a regimental combat team) and the 1st Marine Division handed over to the 40th Infantry Division, which in turn handed over to the Australian 5th Division.

We encourage viewers to add comments and, especially, to provide additional information about our videos by adding a comment! See something interesting? Tell people what it is and what they can see by writing something for example like: “01:00:12:00 — President Roosevelt is seen meeting with Winston Churchill at the Quebec Conference.”

This film is part of the Periscope Film LLC archive, one of the largest historic military, transportation, and aviation stock footage collections in the USA. Entirely film backed, this material is available for licensing in 24p HD and 2k. For more information visit http://www.PeriscopeFilm.com