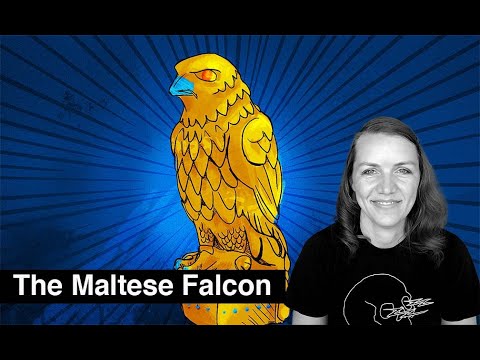 Hello my name is Marcie and today I am going to be talking about the Maltese Falcon. This is one of my favorite movies and I thought I would take a minute to break down why.

Here is a breakdown of the narrative/plot:

Brigid O’Shaugnessy hires detective Sam Spade to find her sister.
Spade puts his partner Miles Archer on the detail and bang he is killed.
Spade suspects something bigger is really at play and the case becomes his obsession.
Umm.. guess what – Brigid was lying and her sister isn’t really missing and instead she is involved in an international treasure hunt with a super rich dude named Kasper Gutman who hires super sketchy people to bully and bribe others to try to find this rare statue that is rumored to be worth the today’s equivalent of millions.
Murder, lying, manipulation, romance, it is all entangled in this story and it is a blissful mess with a strong moral charge.

Here are 3 Reason I love the Maltese Falcon

1. Excellent Thematic in the Bird – this movie is rich with meaning surrounding the acquisition of a rare statue. Kasper Gutman’s obsession with trying to find and purchase this mythical item of antiquity is to be taken as a lesson in morals. While it is okay to want things, it is not okay to worship them and to go after objects and material possessions to the threat of other’s well being. Gutman shows he is willing to hire hitman and bullies to get his prize even if he has to murder to get it done.

2. Object as Metaphor – the bird itself is a fake! This is so huge.. if the story would have found the real Maltese Falcon which was suppose to be made of solid gold then it would have been a bit of a holy grail type of object. BUT in this story.. it was made of lead. Hahaha! So awesome. It exposes the foolishness of people and the power of a lie. The bird is a lie. While in written language the sentence “A bird is a lie” would be a metaphor — in this film it is shown quite beautifully in a filmic language.

3. Power struggle between Spade and O’Shaugnessy. The end dialog between these two was incredible. The story arc shows Spade being tempted by O’Shaugnessy’s beauty and charm but reveals his moral compass and his mental grip on the power dynamic that exists between them.