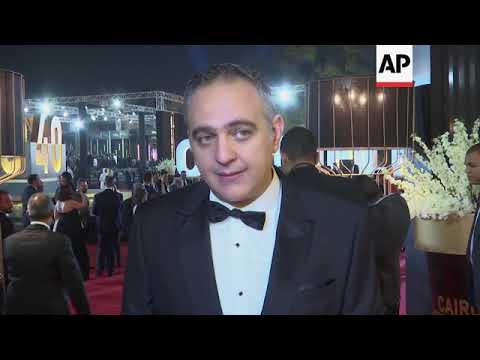 (21 Nov 2018) EGYPT’S 40TH CAIRO INTERNATIONAL FILM FESTIVAL OPENS
The 40th celebration of the Cairo International Film Festival kicked off  Tuesday night with the opening ceremony at the Cairo Opera House.
Stars attending included Lebanese actress Marian Farid Abi Habib, more widely known as Nour; Shereen Reda; Hussein Fahmy and Bushra Rozza, the El Gouna Film Festival Producer.
Speaking the red carpet, Mohamed Hefzy, head of the Cairo International Film Festival said this year’s event showcases the history of Arab cinema and its impact, but it is also looking at the future.
“We also keep up with the pace of change and the new era of the festival.  And our message is that not only should it introduce films and stars but it also needs to provide something for the film industry.”
One of the oldest and most prestigious film festivals in the Arab world, the Cairo International Film Festival offers a platform for Arab filmmakers and Egyptian film stars.
It will screen more than 160 films from 60 countries, including 16 world premieres.
Opening the festival was American drama “The Green Book.”
Starring Academy Award-winner Mahershala Ali and Academy Award-nominee Viggo Mortensen, the film offers a fresh take on inter-racial friendships in America’s deep south in the 1960s.
The festival this year has also announced a special section titled “Arab Female Directors,” which will showcase the work of eight accomplished Arab women filmmakers.