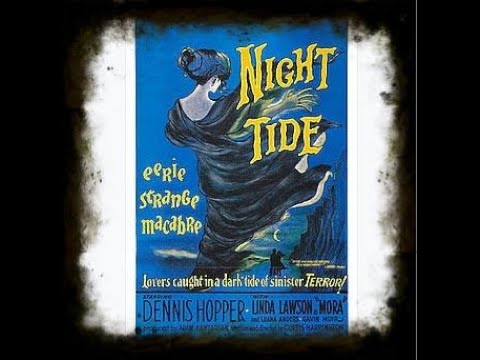 Night Tide is a 1961 American fantasy film sometimes considered to be a horror film, written and directed by Curtis Harrington and featuring Dennis Hopper in his first starring role. It was filmed in 1960, premiered in 1961, but was held up from general release until 1963. The film’s title was inspired by some lines from Edgar Allan Poe’s poem “Annabel Lee The film was released by American International Pictures as a double feature with The Raven
Plot:
Johnny Drake (Dennis Hopper), a sailor on shore leave in Santa Monica, meets a young woman named Mora (Linda Lawson) in a local jazz club where flautist Paul Horn and his band are playing. Mora tells him that she makes her living on the pier appearing as a mermaid in a sideshow attraction under the name ‘Mora the Mermaid’ – a ‘half-woman, half-fish’ on the boardwalk, operated by Captain Murdock (Gavin Muir). She lives in an apartment above the amusement park that houses the merry-go-round. He goes to see her in her mermaid costume at the pier. Mora later tells Johnny that Captain Murdock is her godfather and that he has been like a father to her since he found her as an orphan living on an island, Mykonos. Captain Murdock refers to her as his ‘ward’. Johnny becomes acquainted with the merry-go-round operator and his daughter, who warns Johnny that Mora may be dangerous, as her two previous boyfriends both drowned under mysterious circumstances.
As Mora and Johnny become closer, Mora tells him that she believes she is a Siren, one of the legendary creatures who lure sailors to their deaths under the influence of the moon. Johnny witnesses Mora being followed by a mysterious black-clad woman, the ‘Sea Witch’ (Marjorie Cameron) whom she believes is one of the Sirens, calling her to return to the sea to fulfill her destiny. However, Johnny doesn’t believe that Mora is capable of killing anyone, and thinks she must be suffering from a delusion. During a scuba dive on the day of the full moon, Mora cuts Johnny’s air hose, apparently attempting to drown him. He is forced to the surface. She swims out to sea and disappears.
Johnny is devastated, but returns to the boardwalk the following evening and goes to the sideshow, where he finds Captain Murdock at the entrance as usual. Peering into the mermaid tank, he sees Mora’s corpse on display. Captain Murdock appears brandishing a gun, admitting to Johnny that he killed Mora’s boyfriends because he couldn’t bear the thought of her leaving him. Murdock fires at Johnny, but misses. The gunshots attract the attention of two policemen on the boardwalk, and Murdock and Johnny are taken into custody.
Source – Wikipedia
#ClassicHorror #VintageconnoisseurPresents #SciFiMovies
Please Like and Subscribe! https://www.youtube.com/channel/UCBWs8bvBOk36ccEODelS