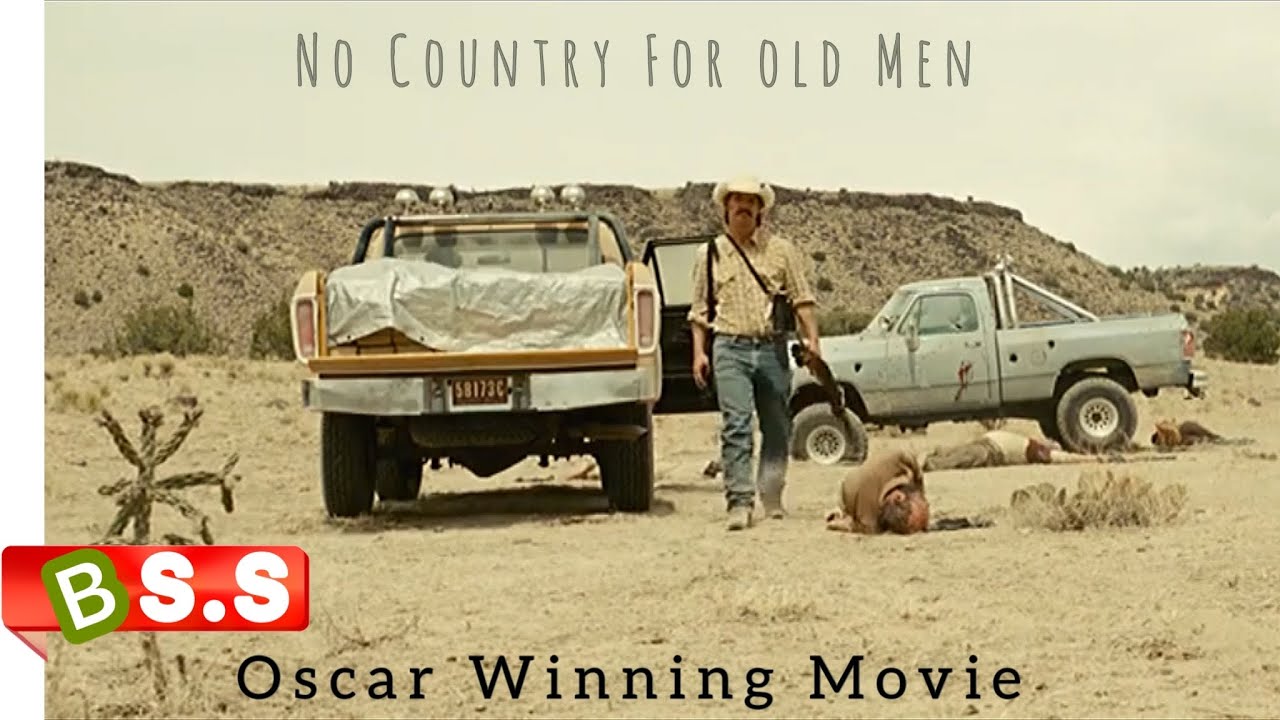 Based on
No Country for Old Men
by Cormac McCarthy

In 1980, hitman Anton Chigurh is arrested in Texas. In custody, he strangles a deputy sheriff and uses a captive bolt a man on the highway and escape in his car. He spares the life of a gas station owner who guesses the result of Chigurh’s coin toss. Moving to a hotel in the border town of Eagle Pass, Moss discovers the tracking device, but Chigurh has already found him. Their gunfight spills onto the streets, killing a bystander and seriously wounding both. Moss flees across to Mexico, stashing the case of money along the Rio Grande. Finding Moss severely injured, a passing norteño band takes him to a hospital. Carson Wells, a bounty hunter, fails to persuade Moss to accept protection in return for the money. Chigurh stitches his own wounds with stolen supplies and sneaks up on Wells at his hotel. Unsuccessfully bartering for his life, Wells is killed by Chigurh. Moss telephones the room, and Chigurh vows to kill Carla Jean unless Moss returns the money. Moss retrieves the case from the Rio Grande and arranges to meet Carla Jean at a motel in El Paso, where he plans to give her the money and hide her from danger. Carla Jean is approached by Sheriff Bell, who promises to protect Moss. Carla Jean’s mother unwittingly reveals Moss’s location to a group of Mexicans tailing them. Bell reaches the motel rendezvous at El Paso, only to hear gunshots and spot a pickup truck speeding from the motel. In the parking lot, Bell finds Moss dead, as does Carla Jean, who arrives later. That night, Bell returns to the crime scene and observes the lock blown out. Chigurh hides behind the door after retrieving the money. Bell enters Moss’s room and sees the vent removed. Later, Bell visits his uncle Ellis, an ex-lawman, and tells him he plans to retire because he feels “overmatched” by the recent violence. Ellis replies that the region has always been violent. Weeks later, Carla Jean returns from her mother’s funeral to find Chigurh waiting in her bedroom, per his threat to Moss. She refuses his offer of a coin toss for her life, stating that he cannot pass blame to luck: the choice is his. As he drives through the neighborhood, a car crashes into his at an intersection, breaking his arm. He bribes two young witnesses for their silence and flees on foot. Now retired, Bell shares two dreams with his wife. In the first, he lost some money his father had given him. In the other, he and his father were riding through a snowy mountain pass; his father had gone ahead to make a fire in the darkness and wait for Bell.