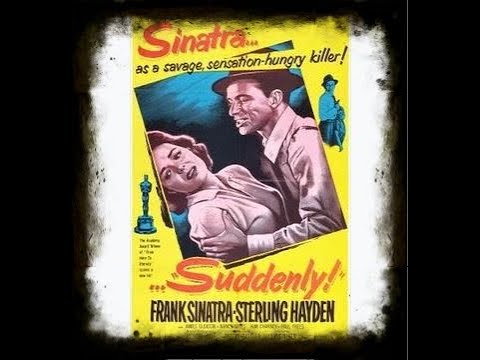 Suddenly is a 1954 American noir crime film directed by Lewis Allen with a screenplay written by Richard Sale. The drama stars Frank Sinatra and Sterling Hayden, and features James Gleason and Nancy Gates.
The story concerns a small California town whose tranquility is shattered when the train of the president of the United States is scheduled to make a stop in the town, and a hired assassin and his henchmen take over a home that provides a perfect vantage point from which to assassinate the president.
Plot:
In post-war America, a train carrying the president of the United States is scheduled to make a stop in the small town of Suddenly, California. Claiming to be FBI agents checking up on security before the president’s arrival, three men arrive at the home of the Bensons: Ellen, a widow, her young son “Pidge,” and her father-in-law, “Pop” Benson. The house is on top of a hill that looks down on the station where the presidential train is scheduled to stop, making it a perfect perch from which to shoot the president when his train stops. However, it soon becomes clear that the men are not Government agents but assassins, led by the ruthless John Baron, who take over the house and hold the family hostage, planning to shoot the president from a large window in the home.
Sheriff Tod Shaw arrives with Dan Carney, the Secret Service agent in charge of the president’s security detail. When he does, Baron and his gangsters shoot Carney dead and a bullet fractures Shaw’s arm.
Baron sends Benny, one of his two henchmen, to double-check on the president’s schedule, but shortly after confirming to Baron that the train is scheduled to stop in Suddenly at 5 p.m., Benny is killed in a shootout with the police. Meanwhile, Jud, a television repairman, has shown up at the house and also becomes a hostage. Pidge goes to his grandfather’s dresser to get some medication and notices a fully loaded revolver which he replaces with his toy cap gun.
When the hostages try to appeal to Baron’s patriotism, it becomes clear that he has none: he has been hired to kill the president for money. But when Baron is confronted by the sheriff on the risks of killing the president, including whether he will ever see (let alone live to enjoy) his money, Baron’s remaining henchman begins to show some reluctance to go through with the assassination. For Baron, however, these are the very least of his concerns, and it soon becomes clear that he is a psychopath whose pleasure comes from killing – who he kills and for what reason being of little importance to him.
In the meantime, the assassins have mounted a WWII-vintage German sniper’s rifle onto a metal table by the window overlooking the train station. Jud, under the guise of fixing the TV, discreetly hooks the table up to the 5000-volt plate output of the family television. Pop Benson then intentionally spills a cup of water on the floor beneath the table. Although the hope is that Baron will be shocked and killed in this way, it is his remaining henchman who touches the table first and is electrocuted, reflexively firing the rifle repeatedly and attracting the attention of police at the train station. Baron shoots and mortally wounds Jud, disconnects the electrical hook-up and aims the rifle as the president’s train arrives at the station, only to see the train pass straight through. As an utterly surprised Baron says “[i]t didn’t stop,” Ellen Benson shoots Baron in the abdomen, and Shaw picks up a gun and shoots him a second time. Baron, having dropped to the floor, begs for mercy —— “No, don’t…no, please…no, no, no” —— and dies.
In the aftermath of the harrowing incident, outside the local hospital Shaw confirms to Ellen that Jud “didn’t make it.” Telling Ellen that he needs to go back to his office, Shaw then makes plans to meet Ellen after church the next day, and they kiss. After she leaves, a driver stops to ask for directions and then asks for the name of the town. When Shaw says it is “Suddenly,” the driver notes that “that’s a funny name for a town.”
Source – Wikipedia
#CrimeNoir #VintageconnoisseurPresents #VintageThrillerFilms
Please Like and Subscribe! https://www.youtube.com/channel/UCBWs8bvBOk36ccEODelS