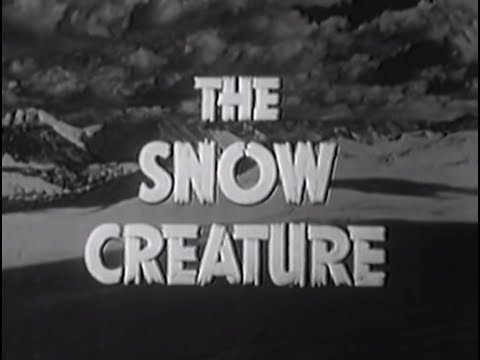 If you like this movie and our channel, please subscribe: https://goo.gl/0qDmXe | The movie has two acts, the first taking place in the exotic locale of the Himalayas and the second occurring in Los Angeles, California. While the first act takes place in an undisclosed Himalayan country (presumably bordering India) the actors portraying the locals speak Japanese. The movie starts with a scientific expedition intent on collecting botanical samples, led by Dr. Frank Parrish (Paul Langton) and encounters difficulties when the wife of the expedition’s chief guide is kidnapped. The guide, a sherpa named Subra (played by Teru Shimada), seizes the expedition’s guns and takes control of the team when he is unable to convince Parrish to pursue the Yeti and save his wife. Parrish, a man of science, is skeptical of the Yeti’s existence, put is forced to participate in Subra’s march. Along with his fellow westerner (a photographer named Peter Wells, played by Leslie Denison), Parrish awaits his opportunity to overthrow the renegade sherpa. However, as the team draws closer to the Yeti, evidence emerges that begins to change Parrish’s opinion regarding the creature’s existence (such as the tell-tale “giant footprints”). Finally, the team makes contact with the snow creature, who hurls stones at them from atop his mountain refuge.

The expedition tracks the creature to his cave, where they encounter the creature, along with two other Yeti’s – a female and young one. The team also discover Subra’s wife, who is guarded jealously by the snow creature. Parrish forcibly prevents the enraged Subra from shooting the Yeti, reasoning that the creature is more valuable for science alive. This delays the capture long enough to enable the creature to create a cave-in (presumably to keep his family safe from the humans). However, the cave-in works against the Yeti, killing the female and young Yetis and knocking the snow creature himself unconscious. The cave-in also enables Parrish and Wells to take control of the sherpa’s guns. Having regained control over the expedition, and successfully capturing a live Yeti, Parrish declares that he is intent upon bringing the creature to the U.S. where it will be studied.

The Yeti is eventually sedated and placed in a telephone booth-sized freezer. Trapped inside this icebox, the Yeti is transported to Bombay to be flown to California. In an odd geographic twist, the return flight heads west from India to California (via TWA) — beginning the second act. Upon reaching Los Angeles, Parrish is greeted by reporters who have been made aware of the creature’s existence. A U.S. Customs official informs Parrish that the admission of this creature to the U.S. has been made difficult by a newspaper article published by Peter Wells that refers to the creature using the term “man”. The issue is raised whether the snow-creature is actually human and the officials decide to keep the creature in quarantine until an anthropologist can determine the question of the creature’s humanity. It is during this delay at the airport’s customs station that the snow creature manages to escape the ice box (which was apparently meant to confine him temporarily only). The snow creature roams the city, terrorizing a woman and finding refuge in the cool temperature of the city’s sewers as well as meat-lockers (where it can also feed).

The police, aided by Parrish, manage to track the Yeti through the sewer system and, where the creature is caught in a roap mesh and grabbed by 5 men. As the creature resists it starts to choke one of the men through the mesh. One of the men shoots the creature once who then stops choking the man. There’s a pause after the choked man had been released and then the man with the gun decides to shoot the rare creature with two more slugs just for good measure. Thus, one of the greatest finds of all time is dead.